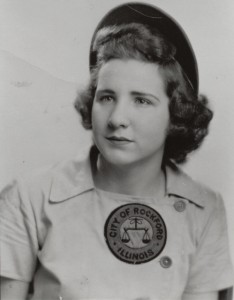 Courtesy of the Saskatchewan Sports Hall of Fame and Museum

When William and Caroline Warwick came to Regina in 1922, they and their ten children didn’t have an easy time getting settled. The family changed homes four times during their first four years in the city, finally settling for the long run in the North Central neighbourhood. William worked a variety of jobs to support his wife and children, but money was still short, and at times the family literally didn’t have a penny to their name.

The shortage of money meant that for Millie Warwick and her nine siblings, holiday trips and expensive toys were impossible dreams. The only activity within the children’s means, and their only real hope of fame or fortune, was playing sports. And so playing sports was what they did, pouring themselves with great dedication into any game they could arrange. As far as the Warwick children were concerned, Boxing Day was a day set aside for boxing, and they spent it sparring with one another in a makeshift backyard ring.

When she started at Kitchener school in 1928 Millie proved herself an excellent all-around athlete, taking up sports ranging from track and field to baseball to gymnastics, and winning inter-school competitions in many of them. But the sport that would shape her future was softball, a game she’d been organizing and playing since before she even began school.

Millie’s talent as a second basewoman quickly became apparent once she entered high school at Balfour Collegiate. Though she was still successful in other sports, even becoming city champion during two of her three years of speed-skating, she excelled at softball. At every inter-school track and field meet of her high school career, she placed first in the softball throw, with a record-breaking performance in 1940 that got her voted the meet’s most outstanding athlete. Starting in 1938, she spent five years playing for the Regina Bombers in the Intercity Ladies’ Softball League, where she helped the team win two provincial championships and was named MVP in 1941.

While playing in Regina, 18-year-old Millie caught the eye of a scout from the All-American Girls Professional Softball League—a new all-female league created to fill the gap made by male players leaving to fight in the Second World War. Never expecting to actually make the league, she tried out at Chicago’s Wrigley Field, and found herself signing an $85/week contract (about $1150 today) to play second base for the Illinois-based Rockford Peaches’ 1943 season. She was voted MVP during that first season, and stayed on for the following year, before an encounter with her brother Billy’s roommate set her life moving in another direction.

Ken McAuley, the goalkeeper for the New York Rangers, had his eye on Millie from the moment his teammate Billy showed him her picture. The attraction turned out to be mutual, and Ms. Millie Warwick soon became Mrs. Warwick-McAuley. The couple moved to Ken’s hometown of Edmonton, where they founded ‘The Mortons,’ a new women’s softball team. Millie played third base for the Mortons from 1945 through 1947, after which the couple moved to Saskatoon. There Millie signed on with Grey Cab Ramblers ladies’ softball team for their 1948 season, helping them win the provincial championship, before returning to Edmonton and the Mortons the next year. In 1951, the Mortons’ outstanding 34-1 season earned them a place in the national championship, where they triumphed over the heavily-favoured Toronto Ace Queens to bring home the title.

Her 1951 victory was the highlight, and the end, of Millie’s professional sports career. The next year, her first child was born, and she turned her attention to motherhood – a task that narrowly beat out sports in terms of importance for her. But even after she stopped playing, Millie remained a dedicated baseball fan and an advocate of sports programming for women.

In 1986, Millie and four of her brothers were inducted as a group into the Saskatchewan Sports Hall of Fame, marking the Warwicks as one of the greatest sporting families the province has ever produced. Another, rather different honour followed for Millie six years later, when the movie A League of Their Own brought a fictionalized retelling of the Rockford Peaches’ story to the big screen. The film became one of her favourites.

In 2004, at age 81, Millie and a fellow Rockford Peaches teammate were chosen as ambassadors for the first World’s Cup of Women’s Baseball, held in Edmonton. Two years later, in December 2006, she passed away at her home in Edmonton. Millie, and the Warwick family, remain sports heroes provincially and nationally, and stand as symbols of success despite their humble beginnings in North Central Regina.