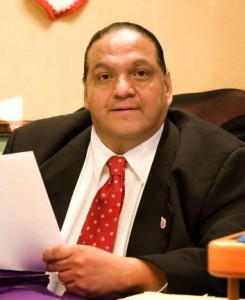 Kevin Daniels came by his success the hard way.

Born to parents who had lost their official Indian status and been forced to live off their reserve, Daniels spent the first years of his life living on the fringes of society.

“We were basically living in the coulees (and) the ditches in the Touchwood Hills area until … about 1963,” he recalls. After that, they were forced from the area and headed for Regina, becoming part of the first wave of a massive influx of Native people into the city’s North Central area.

The neighbourhood they moved into was largely poor and underdeveloped, without even running water – residents supplied themselves from pumps on the street corners. But harsher than the lack of amenities was the attitude of their neighbours.

“At that time, there was a lot of racism … but we always stood up for ourselves. We always fought back (against) those that hated us,” recalls Daniels.

Daniels’ family moved to the Warehouse District after two or three years in North Central, and later returned so he could attend local schools. But he could find no place in an education system that “taught (Natives) that we were savages, and that our ideas were crazy and insane.” He dropped out of high school, and instead started learning from his uncles and other Native political organizers. Daniels soon found himself drawn into their world.

“I got involved in politics at a very young age,” he says, “because of the struggles of living the urban lifestyle: the alcoholism, the drugs, the unemployment situation, the poverty. We wanted to fight for change.”

It didn’t take Daniels long to make his mark in Aboriginal politics. At age 22, he was elected vice-president of the local branch of the Association of Métis and Non-Status Indians of Saskatchewan (AMSNIS), and went on to found a youth branch of the association.

Daniels stayed in North Central for almost three decades, always an outspoken voice on Native issues. But when the Oka Crisis erupted in the summer of 1990, he left Regina and headed east to help the Mohawks of Kanesatake in their confrontation with the Quebec government.

Afterwards, Daniels settled in nearby Akwesasne, Ontario, but returned to Regina often to help solve injustices in his hometown. In 2006, he took on the issue of Native gangs – a problem that had cost the lives of some of his nieces and nephews – by helping launch the Regina Anti-Gang Services, which helps gang members escape their lives of crime and build stable futures.

Four years later, his political career took a leap forward — he was elected national vice-chief of the Canada-wide Congress of Aboriginal Peoples, and a month later appointed as its interim chief.

Following the next election, Daniels resumed his role as vice-chief, but grew dissatisfied with the job.

“A lot of the work I was doing, I couldn’t get done in that capacity,” he says. “So I resigned and decided to get into something else that would bring (Native) issues out, but in a different way. So I got involved in the movie business.”

Enlisting the help of some close friends in the industry, including Manitoba-born star Adam Beach, Daniels started work on Traditional Trading, a film about cigarette smugglers in the early 90s.

With Traditional Trading still in development, Daniels continues to keep on eye on his home province, and lend a hand whenever it’s needed. He’s currently working to found a Kinookimaw-based group called People of the Last Mountain, which will work on cultural, safe housing, and environmental issues.