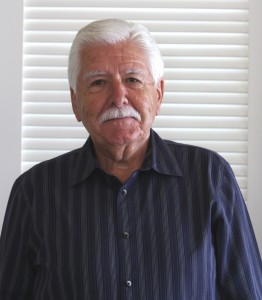 Ed Sawyze started small. Growing up in North Central in ’40s and ’50s, he earned his money delivering the Leader-Post, and sweeping a Safeway parking lot for a dollar an hour. But when it came to success, Swayze didn’t have to look far for inspiration.

“It was never poor. Anything but,” he says of the neighbourhood he remembers growing up in. Though it had its share of struggling families, there were also plenty of success stories at hand. On Swayze’s block alone lived the owners of a lumber yard, a coal supplier, and an ice company; nearby were an Imperial Oil executive, a hotel manager, and the president of the Saskatchewan Transportation Corporation.

The neighbourhood didn’t provide much inspiration for a future policeman, however. He remembers it as a safe place, where few people locked their doors and there was a general sense of togetherness.

“If some folks from the other side of the town wanted to give (local people) some trouble, they’d get looked after,” he says. And that togetherness stayed with him and his neighbours: “A lot of the friends we had back the are still our friends today.”

He and his friends found plenty of ways to keep themselves occupied during their North Central childhoods. Boy Scout and Girl Guide groups were formed, and Swayze belonged to the Air Cadets, but sports were the most popular activity.

Some games, like football, were played in organized leagues with plenty of community backing: Swayze played high school football at Taylor Field, coached by Roughriders like Bill Clarke and Galen Wahlmeier. But other sports, especially soccer, were run mostly by enthusiasm and guesswork.

“Nobody knew how to play soccer. Our teachers didn’t know anything about it. All you did was put on the biggest boots and play the guys at Benson School,” recalls Swayze.

Throughout his youth, Swayze never dreamed of joining the police force — his plan was to become an air force pilot. But the air force recruiters encouraged him to try policing instead, so Swayze put in application with the Regina and Edmonton police services and the RCMP.

A year went by with no response, so Swayze continued his job packing groceries at the local Safeway, and was soon promoted to work in the company’s personnel and advertising departments. But before his grocery store-management career could go far, he explains, “lo and behold, I got a nod from all three (police departments.) I guess they were all hiring at the same time.”

Swayze chose Regina, wanting to work in the place he knew best, but the odds were against him – police forces at the time shied away from recruiting locals, believing they were more easy to corrupt. And in his first entrance exam, he and the civilian employee administering the test “didn’t hit it off very well” — Swayze ended up walking out over a difference of opinion.

His second application went much better, and Swayze started walking his first beat, in east Regina, in July 1960. After seven years of working the night-shift as a patrolman, he was made a plainclothes constable in the criminal investigation department. He helped investigate the famous 1983 killing that led to the conviction of Colin Thatcher, son of a former Saskatchewan premier, but Swayze dismisses the case as “just another murder with a higher profile.” More memorable to him is the time he arrested a newcomer to Regina for armed robbery, despite the man’s claim that he’d been “reading poetry and roasting a chicken” at the time. Nagged at by the unique alibi, Swayze did some more investigating, and soon found the real culprit, who turned out to be a look-alike of the man he’d arrested earlier.

“To me, that was something memorable, and good work, but it could have gone wrong had he come up with some kind of reasoning other than ‘reading poetry and roasting a chicken,’” he said. “It’s as important to prove someone innocent as it is to prove them guilty.”

In the ’70s and early ’80s, Swayze was president of the Saskatchewan Federation of Police Officers, and used his position to help pass the Saskatchewan Police Act, which laid down standards for hiring, training, and equipping police officers throughout the province, as well as discipline and civilian complaint procedures.

Swayze’s stint as with the criminal investigation department was supposed to last six months, but he ended up staying in the job until 1984, when he was promoted to deputy chief. He took on the job just as the police service was hit with major budget cuts and downsizing. Though he worked to minimize the losses, he soon saw crime rates rise in Regina, especially in the neighbourhood where he’d grown up.

Swayze retired in late 1993, after 33 years in law enforcement. Though he was for a time a Paul Harris Fellow with the Eastview Rotary club, he now tries to keep his formal commitments to a minimum. That leaves him free to spend his mornings playing the stock exchange, and his afternoons helping out any friends, neighbours or strangers who might need a hand.