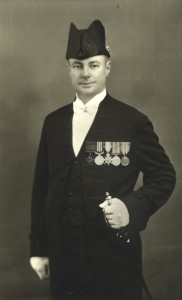 Courtesy of the Saskatchewan Archives Board.

Of the 600,000 Canadians who served in the First World War, Saskatchewan’s George Harry Mullin was officially one of the 70 bravest.

Mullin came to the town of Moosomin when he was just two years old. When his parents moved further west a few years later, he and his brother Roy stayed on a nearby farm with their two uncles. There, Mullin learned to shoot at an early age, starting to hunt prairie chickens as soon as he was strong enough to carry a rifle.

He was soon called on to use his marksmanship against more than just wild birds. In 1914, when Mullin was 17 years old, war was declared, and Mullin enlisted as soon as he could be spared from the farm. He served with the Princess Patricia’s Canadian Light Infantry in France, rising to the rank of sergeant. In the process, Mullin became a skilled scout and sniper, and earned a reputation for taking great personal risks. But despite his recklessness, Mullin avoided injury until June 1916, when he suffered a slight wound and was sent back to England to recover. Mullin soon learned that his brother Roy had not been so lucky: he had enlisted in February 1916 and been killed in September.

In April 1917, Mullin took part in the famous Canadian attack on Vimy Ridge, earning the Military Medal for his bravery during the battle. Six months later, during the battle of Passchendaele, he earned an even greater honour by winning the Victoria Cross—the highest honour available to British Commonwealth troops, and one that only 70 Canadians earned during the war.

Mullin earned his VC on October 30th, a day that found his unit under fire by a German ‘pillbox’ fortification that had stopped the Canadian advance and inflicted heavy casualties. Moving out from behind cover, Mullin crept toward the German position while under heavy fire, stopping to take out an enemy sniper position along the way. Reaching the pillbox, he climbed on top, shot the two machine gunners inside with his revolver, then rushed to another entrance and forced the remaining ten occupants to surrender. By the time he’d seized the pillbox, Mullin’s clothes were riddled with bullets, but he was unharmed.

After the heroic display that earned him his Victoria Cross, Mullin returned to England to train as an officer—VC winners are by custom never returned to combat. While in England, he met and married a young woman, and in July 1919 returned with his bride to a hero’s welcome in Moosomin. But though his death-defying solo attack and the rare award it earned him ensured Mullin a good deal of fame, he was always humble about the achievement. When he’d written home after being recommended for the Victoria Cross, he said he didn’t expect to actually receive it, and back home in Saskatchewan, he typically described his award-winning bravery to admiring locals as “just another job of work.”

Mullin remained a military man for a while after his return, joining the 1st Assiniboia Militia Regiment and rising to the rank of major. In 1934, he came to Regina to serve as the Sergeant-at-Arms of the Saskatchewan Legislature, responsible for both the security of the Legislative Building and the ceremonial handling of the Mace, which symbolizes the authority of the House Speaker. Mullin left the position in 1941 to sign on with the Veterans Guard of Canada, where he stayed until 1947, guarding German prisoners of war—many of whom would salute him as he passed in recognition of his prestigious medal. In 1947, he resumed his role as Sergeant-at-Arms, and settled at 1262 Garnet street in Regina, remaining at the same address and job for the rest of his life.

In the last ceremony before the provincial legislature ended its spring session in 1963, Mullin was awarded a plaque announcing that, in honour of his military service, a lake in the province’s far north would be named after him. Just a few hours later, in the early morning of April 6, he passed away at his Garnet Street home.