Be sure to check out the Map of North Central. 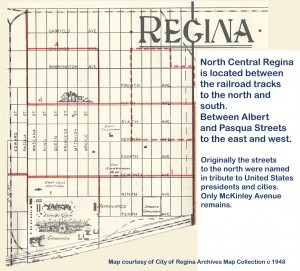 The North Central neighbourhood in Regina, Saskatchewan covers 183 square blocks and is currently home to over 12,000 residents.

North Central’s rich history began with its establishment as an immigrant and working-class neighbourhood in the late 19th century. It has been shaped by both local movements and broader provincial trends, including the development of the Canadian Pacific Railway, the creation of housing for WWII veterans, and the increasing urban residency of First Nations and Métis people.  Contemporary North Central suffers from a negative reputation related to crime and violence, and important contributions from the neighbourhood have been obscured by this perception.